Ashdown Pantomimers, well known for it's Forest Row Panto, is a non-profit making amateur dramatic group that welcomes participants of all ages.
The pantomime group was formed in 1988 from an idea by Ann Pavitt and Merle Joslin.
Merle donated £200 to get the group going and it has now been running for 30+ years and has performed Aladdin, Snow White, Goody Two Shoes and Red Riding Hood, to name but a few.
Our last production was The Little Mermaid in 2020 and our new production for 2022
will be CAMELOT. 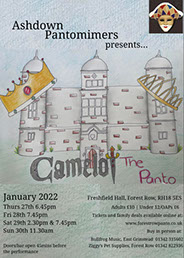 In the event that the show is sold out we will endeavour to resell them.

A message from the  Ashdown Panto crew

We are excited to announce that we will be back in 2022 with a new production - CAMELOT. Rehearsals have started and we have new members, lots of songs and we really hope to see you all in January 2022.  Keep Safe everyone.

Thankyou to all of our audiences that came to see The Little Mermaid in 2020.
We had a great time performing it for you.

Gwen Pritchett was the director for this production and we had two new principals. Karleen Stevens played Prince Stephan. Karleen came to England in 2007 from Australia, where they had no idea what pantomime was (They do now!) This was her first major part as principal boy. Karleen also did most of the choreography. Some additional choreography was created by Noa Ofir. Noa played Marina, another principal debut. This is Noa’s 4th panto with us, as well as being in chorus she has played the spider in Rapunzel.

We saw Shane Hannam reprise his role as the Dame, a hypochondrial Queen and Robin Shergold the baddie, Archduke Boris, along with his daughter Ingrid, played by Laura Jane Carter. Another new member was Tom Brooker, who played the King to Shane’s Queen. A romance that has lasted through lockdown. The evil Octopus, Octavia, who tries to steal Marina’s voice, was beautifully played by Alex Brooker.

The main players were wonderfully supported by Leah Jane Kauffman as the Lord Chamberlain, Jane Oliver as Queen Salacia, Freya Talbot as Oceana, James Walsom as Baldrick and Grace Smith who played Heidi, long suffering maidservant to the Queen, all long serving members of the company.

Special thanks go to our ‘behind scenes’ crew. Tim Walden for fabulous lighting, Pete Caruna our musical director for our original opening song as well as backing for all our musical numbers, Julie Reilly and Lynn Dixon for stage management and props, Lin Smith and Debbie Millard for costumes and Julian Johnson for backcloth scenery painting.

Also thanks for our bar staff and front of house volunteers and all the other friends of the panto that go to making a performance possible.

And most of all to YOU, our audience. We will miss you this year but hope to see you all in 2022.

Pete has provided percussion for our pantomimes for many years but has now taken on the role of musical director which has led to a lot more songs being included in the show! Pete has also written us original lyrics to go with well know tunes. He enjoys writing and arranging songs in a variety of genres and runs a small recording studio locally.

Tim started with the Pantomimers 16 years ago in Little Jack Horner. Since then he has done the technical services for Forest Row Dramatic Society, Sackville Players, Forest Players and others. Tim is pursuing a career in the performing arts industry as a Lighting Designer and Operator. Tim is a professional technician and stage crew who has been working on productions at the Hawth in Crawley.

Tony is Gwen's husband and this year they have been married for 60 years. Tony has 'retired' from performing now, having played an assortment of parts over the years. A look at some past programmes shows that he has directed at least three times, played the dame twice, the bad guy once, plus other parts such as fathers, barons, mayors etc. He was also was involved with lighting once, and assistant stage manager at least once. He still helps out behind the scenes and supports the production team. 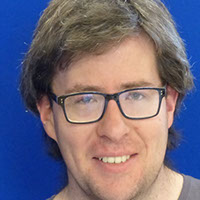 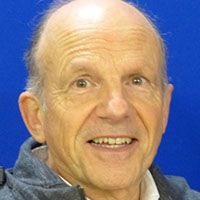 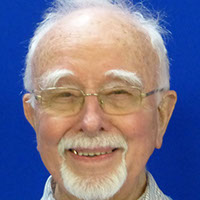 Anyone aged between 12 and infinity.

DO I HAVE TO BE ABLE TO ACT DANCE OR SING?

It helps if you want main part! But we encourage participants for the chorus where a bit of singing and may be a bit of movement is required. We also welcome people who can help with costumes, backstage, props and set painting. For performance week we also like help with front of house and serving at the bar.

DO YOU CHARGE A MEMBERSHIP FEE?

To cover the cost of insurance subscriptions for the season are £10 for under 18 years and £20 for over 18 years.

WHEN DO YOU AUDITION?

Auditions are usually held in the first weeks of September.

Rehearsals start in October and are on a Wednesday evening between 8pm and 10 pm then in November this extends to Thursday evenings as well. We try to get the younger members of the company away by 9pm whenever possible. After Christmas when we are leading up to the performance there will also be some ad hoc Saturdays and Sundays.

HOW MANY PERFORMANCES DO YOU DO?

HOW TO FIND US